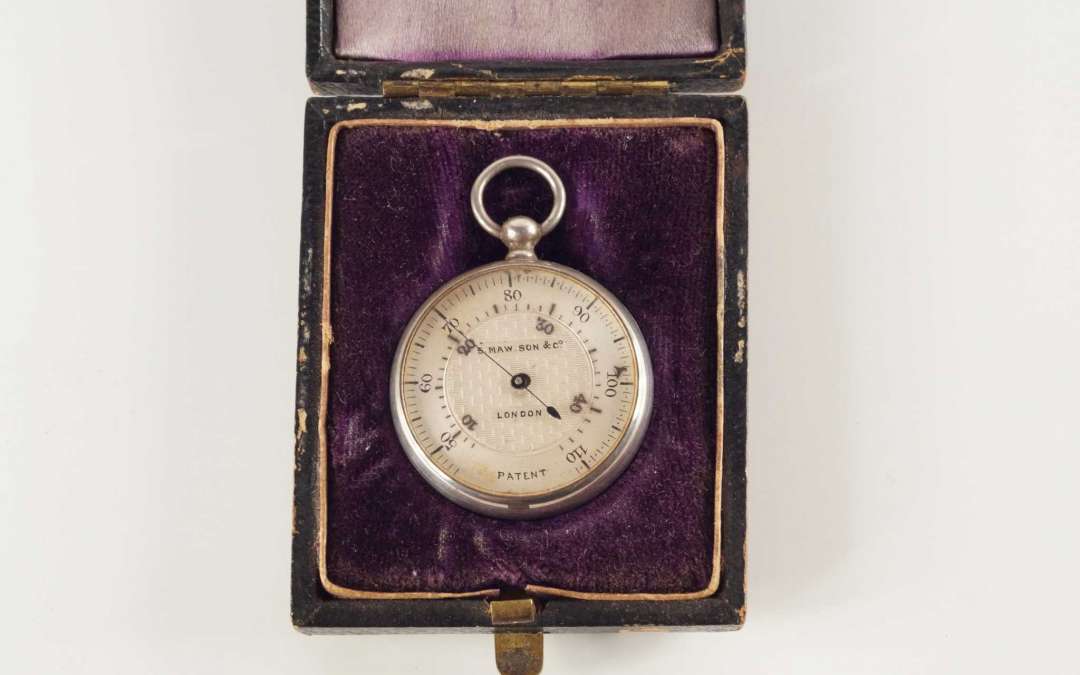 The story behind the watch shaped thermometer invented by Moritz Immisch(1838-1903).

Moritz Immisch was born in Germany and was the eldest son of August Christian Immisch, a watchmaker. After graduating from University he and a younger brother emigrated to England in the early 1860’s and they both settled in London. In 1876 Moritz married an English lady and became a naturalized British citizen in 1896.

Initially he started by making his name among the chief watch and clock manufacturers and in 1872 he submitted an essay (“The Balance Spring”) on the balance spring and its isochronal adjustments and was awarded the British Horological Institute’s Baroness Burdett Coutts Prize and the essay was published in book form.

Immisch was granted a patent in 1881 for a small watch shaped thermometer that functioned on the variable expansive properties of fluid in a Bourdon tube (an instrument for measuring the pressure of gases or liquids consisting of a to which the tube is straightened by the pressure semicircular or coiled, flexible metal tube attached to a gauge that records the degree to which the tube is straightened by the pressure of the gas or liquid inside). This metallic instrument was designed to be more robust than contemporary glass thermometers filled with mercury. Due to the speed of the temperature-expansion and the calibration, the watch dial indicator allowed very accurate readings to be taken and the small size of the thermometer made it highly portable as a clinical instrument.

Hundreds of Immisch thermometers were tested for accuracy at the Kew Observatory every year after its launch. It was awarded a Silver Medal at the International Medical Congress of 1881 and received awards at the Inventions Exhibition of 1885 in London, as well as the Exposition Universelle in Antwerp and the Gewerbe und Industrie Ausstellungin Görlitz, also in 1885.

Immisch’s interest in the science of electricity and magnetism lead him into design and construction of electric motors. By1880 his experiments in small dynamo-electric machines led him to step away from watch-work and explore the new opportunities in the emerging electrical engineering industry. It is this connection with the motor and early development of electric power that Mortiz Immisch is chiefly remembered for, although records of the patent offices of Europe and America demonstrate what a prolific inventor he was. Between 1818-1890 he had filed over forty patents.